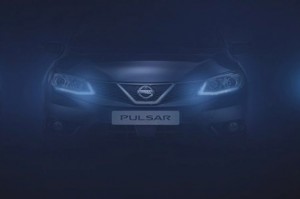 The Nissan Pulsar doesn’t have what we’d consider a rich history in the US, other than on some models decades ago. However, the nameplate has been part of the Nissan lineup globally since 1978 and has proven popular in Asia and Australia. Now, the brand is teasing a five-door hatch to revive the name and hit European showrooms this fall.

The new Pulsar will be built at the company’srecently renovated factory in Barcelona, Spain. It’s not clear from the teaser whether this is the same model that is already sold in other parts of the world or a brand new vehicle. Although, Nissan says in the announcement that the car “has been designed to meet the specific demands of European car buyers.”

With competitors like the Volkswagen Golf and Ford Focus, the European five-door hatch market is seriously competitive. It will be interesting to see if Nissan will have something special to bring to the table. Scroll down to read Nissan’s full teaser about its latest hatchback in Europe.

On sale across Europe from autumn 2014

PARIS, France, 16th May 2014 – Nissan is to return to the C-segment with an all-new model called Pulsar. Set to be revealed on 20th May, 2014, the spacious five-door hatchback has been designed to meet the specific demands of European car buyers and will be built at Nissan’s Barcelona, Spain, factory.

The Pulsar will re-establish Nissan’s strong link with the C-segment – the second largest sector in the European car market. Designed with the same high quality, high innovation approach that has come to typify Nissan models, the new Pulsar will go on sale from autumn 2014.

The Pulsar name enjoys a rich history in Nissan’s product timeline, having first appeared in 1978. Widely used for models in Asian and Australasian markets over the course of the last four decades, the Pulsar badge also appeared in certain European markets in the early 1990s on the N14 model.

More information and images of the new Nissan Pulsar will be available following the official unveil at http://www.newsroom.nissan-europe.com/.