The 2015 Nissan Pathfinder is a dependable and spacious mid-size SUV, and drivers near Bonney Lake and Tacoma can’t wait to see what the next model will offer. Advancing into its fourth generation, the 2016 Nissan Pathfinder is a classic 7-passenger crossover that will be available soon at Puyallup Nissan. With a projected price tag between $27,000 and $45,000 MSRP for its well-equipped trims, the 2016 Pathfinder is sure to please families that need a versatile vehicle with a roomy cabin when it arrives at showroom later this year. What Changes Will the 2016 Nissan Pathfinder Bring?

Sporting a redesigned exterior and a cabin loaded with popular technology features, the 2016 Nissan Pathfinder delivers subtle advances based on the previous model. Constructed with an aluminum frame, the 2016 model will be considerably lighter than previous generations, making it more maneuverable overall. Inside, cutting-edge features enhance its sense of luxury, adding components like a Nissan navigation system, satellite-based radio and weather alerts, and an 8-inch LCD dashboard display.

How Will It Remain Similar to the 2015 Model?

Despite its dedication to offering drivers a revamped Pathfinder experience, the latest model will incorporate the substantial qualities that pushed the 2015 Nissan Pathfinder to the top of its class. Interior features designed for passenger comfort and convenience will return in the 2016 Pathfinder, which will offer three-zone automatic climate control, keyless entry, and a premium 13-speaker audio system. Under the hood, the 2016 Pathfinder will sport the same 3.5L V6 engine that creates balance between power and optimized fuel economy. Drivers who were impressed by the 2015 Pathfinder’s off-road capabilities will also be pleased to note that the 2016 model offers available 4-wheel drive across all trims.

The 2015 Nissan Pathfinder gave drivers a seamless combination of performance, power, and interior comfort, which secures its place in the mid-size SUV class. Its 3.5L V6 engine produces 260 hp and 240 lb-ft of torque while netting an estimated fuel economy rating of 27 mpg on the highway. Efficient and versatile, the 2015 Pathfinder can tow a maximum of 5,000 pound when properly equipped, earning it best-in class towing ratings. Also specializing in interior spaciousness, the cabin of the 2015 Nissan Pathfinder comfortably seated 7 passengers while offering 79.8 cubic feet of cargo space. 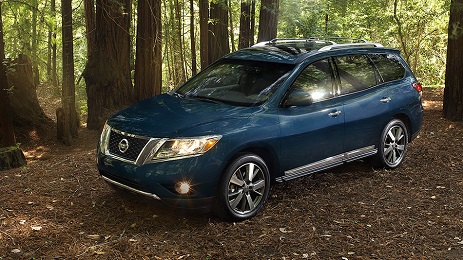 The 2016 Nissan Pathfinder Has Bonney Lake and Tacoma Drivers Thrilled

To experience the 2016 Nissan Pathfinder as the unmatched leader in the mid-size crossover segment, Bonney Lake and Tacoma drivers can visit Puyallup Nissan when the vehicle is released later this year. Located at 101 Valley Ave. NW, our experts will answer any questions you may still have about this highly anticipated model. Feel free to contact us online or by phone at (253) 848-4507 to receive more information today.