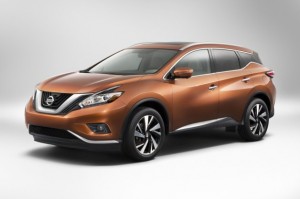 Nissan Motor Co.’s revamped Murano crossover will reach U.S. showrooms this year looking almost identical to the splashy auto show concept that teased it more than a year ago. The automaker — recalling the positive consumer reaction after the Murano’s debut in 2002 — is banking on the racier design to snag attention from new customers in one of the industry’s most competitive light-truck segments.

The 2015 Nissan Murano will be unwrapped Wednesday at the New York auto show. It retains the pronounced body side creases and backwards-sloping “floating” roof of the Resonance Concept shown at the 2013 Detroit auto show.

Nissan plans a global marketing push for the mid-sized sporty crossover for 2015, with one of its U.S. factories tooling up to export the latest Murano to markets around the world. “We worked very hard to keep the final car as close to the dramatic show car as possible,” said Pierre Loing, Nissan’s vice president for North American product planning. “Body panels like those on the Resonance with very pronounced creases can be very hard to stamp at the manufacturing level. But we’ve done it. It’s important for the statement we want to make with this car.”

The third-generation Murano will feature a low-angled front windshield and wide stance. It receives angular “boomerang” head and taillights, sculpted side panels and a hidden D pillar. The roof and body sides sweep together in the back into a rear roofline spoiler. The 2015 Murano will also receive several technology and safety upgrades, including turn-by-turn navigation, and a predictive forward collision system introduced by Infiniti, Nissan’s luxury arm, which responds to traffic activity two cars ahead.

Automakers often create a buzz with aggressive design concepts like the 2013 Resonance, but then tone down the styling in time for mass production to avoid polarizing more sensible shoppers. Not so with the new Murano, says Nissan’s global design chief, Shiro Nakamura.

“Concept cars have historically been used to attract crowds to a manufacturer’s display at auto shows, so the people will stay and look at the production vehicles,” Nakamura said in a statement. “At Nissan, we’re different. We use concepts to explore new design standards with an eye toward bringing them from show stands to showrooms.”