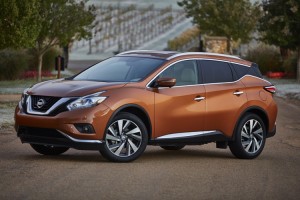 There’s no denying the competitive nature of today’s automotive marketplace and its impact on modern vehicles. Where once upon a time the ownership experience between the highest and lowest quality vehicles could be measured by a zoning commission, today’s cars are so good you need a micrometer. As noted by shoppers at KBB.com, nearly every new model offers more than adequate ride, handling, fuel efficiency, dependability and passenger protection. Now throw in 21st century safety regulations, strict regulations that can dictate much of the exterior size and shape we see in showrooms, and you’re left with a largely homogenized new-car fleet. Automakers trying to distinguish their product in this sea of sameness face a daunting challenge, but one glance at the all-new 2015 Nissan Murano confirms it can still be done. 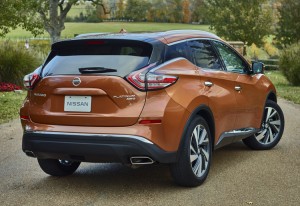 The exterior design of the new Murano goes beyond cliched terms like “forward thinking” or “cutting edge.” Because the popularity of crossovers has spawned over two dozen entries in just the mid-sized category (where the Murano competes), Nissan knew it had to do more than simply add LED taillights and call it day. The original Murano boasted curvaceous styling and excellent functionality when it was introduced over a decade ago. Nissan wanted the 2015 version to offer that same combination. The automaker even spoke to existing Murano owners to get feedback on what the next Murano should represent. The response? “Provocative, premium and optimistic” were common terms, along with “shared experience” and “dress up, dress down.” Owners essentially wanted the new Murano to maintain the current crossover’s flexible nature, comfortably carrying people and cargo to anything from a football game to a fashion show. 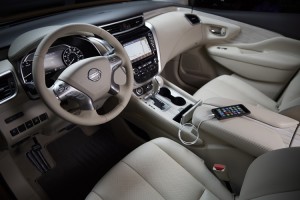 The 2015 Murano delivers on all fronts, starting with an eye-catching exterior that will appeal to both existing owners as well as undecided crossover shoppers looking for something unique. Nissan says it drew inspiration from the early jet age, and much of the Murano’s features, including the pronounced “V-Motion” front end and “boomerang” taillights (both Nissan terms) were first seen in the ”Resonance” concept car that debuted at last year’s Detroit auto show. The 2015 Murano’s floating roof is probably its most creative design element, giving the crossover a remarkably sleek and futuristic profile reflected in its slippery 0.31 coefficient of drag. This shape, along with a 146 pound weight reduction, low rolling resistance tires and active grill shutters, has enhanced more than the Murano’s appearance. The new model gets 20 percent better fuel efficiency for 2015, with an EPA rating of 21 mpg city, 28 mpg highway and 24 mpg combined for both front- or all-wheel-drive versions. And in case you’re wondering, yes, the taillights are now LEDs 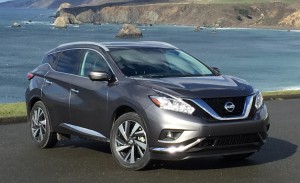 With so many resources focused on exterior improvements one might expect the Murano’s interior to get left out of the redesign budget. Yet Nissan took the same aggressive approach to the cabin area, lowering the dash in the 2015 Murano for improved outward visibility while adding a 7-inch, full color information display in the gauge cluster, dual-zone automatic climate control and push-button start, all as standard equipment. The company’s “Zero Gravity” seats, inspired by NASA technology and designed to reduce passenger fatigue, are also standard for both front and rear occupants. An acoustic laminated windshield and sound-quelling insulation throughout the vehicle structure created a placid environment during our drive along the Northern California coastline, and the quality of the leather and woodgrain in SL and Platinum editions looks and feels as upmarket as anything you’d find in a luxury-badged vehicle. Functionality remains intact, with the new Murano claiming best-in-class cargo volume (behind the second-row seat) of 39.6 cubic feet and a total interior volume of 147.7 cubic feet. 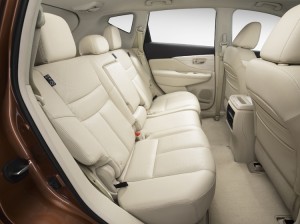 Beyond its fuel efficiency improvement the 2015 Murano’s drivetrain is similar to the outgoing model. It retains its 3.5-liter V6, offering 260 horsepower and 240 pound-feet of torque. This engine delivers power to either the front wheels or all four through Nissan’s continuously variable transmission (CVT) called “Xtronic.” We’re happy to report the rubber-band nature of many CVTs is effectively masked in most of Nissan’s offerings, including the new Murano. Nissan’s “D-Step Logic” technology provides the illusion of traditional gears while maintaining the CVT’s lower fuel consumption. This gives the new Murano a responsive nature when applying throttle and, in conjunction with its front strut and rear multi-link suspension, creates a confident driving experience on twisty roads, particularly with the optional 20-inch alloy wheels (18-inch wheels are standard). A tow rating of 1,500 pounds allows the Murano to pull smaller trailers if necessary. 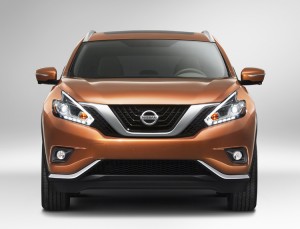 The range of high-tech convenience and safety features available on the 2015 Nissan Murano should satisfy even the most demanding crossover shoppers. Standard features like Bluetooth phone pairing and a rear camera are included in the base “S” front-wheel-drive Murano that starts at $29,560. Moving up through the SV, SL and Platinum versions adds features like heated and cooled front seats, a navigation system with 8-inch touchscreen and voice recognition, a Bose  audio system with dual subwoofers and HD radio, ambient interior lighting, a 360-degree camera view, blind spot warning, rear cross traffic alert and a power lift gate. All of those features are standard on the SL trim, but if you want all that plus heated rear seats, LED headlights, a power tilt and telescopic steering wheel and 20-inch aluminum wheels you’ll have to step up to the $40,600 Platinum version. You can also add a panoramic sunroof, radar cruise control and safety technology like predictive forward collision warning and forward emergency braking to the SL and Platinum models.

This year Nissan will have its best U.S. sales since the brand entered the U.S. market. The company’s success has come as much from its small and midsize car offerings as it has from models like the outgoing Murano, suggesting Nissan hasn’t leaned disproportionately on America’s SUV craze to grow volume (unlike some of its rivals…). But the demand for utility vehicles is undeniable, showing no sign of slowing, which makes the 2015 Murano a critical model for Nissan’s growth plans in 2015 and beyond. After several hours behind the wheel (and more than a few minutes spent analyzing its expressive exterior design), we’re confident the new Murano will help maintain Nissan’s momentum.

Karl Brauer has spent over 20 years working in the automotive industry as a writer, analyst, web designer, online business consultant and media representative.

0 comment(s) so far on 2015 Nissan Murano: Distinguished By Design